As lockdowns continue - and are eased - there is an obvious but forgotten crisis that has already begun but is going to get far, far, worse. And this time it's a human not an economic or medical crisis.

While I was writing an update for the course "Lockdown and Beyond: Providing Financial Services in a Time of Global Crisis with Specific Reference to CoVid-19 (2020) " at www.financialcrimeriskandcompliancetraining.com , it was obvious that a training course designed to produce an agenda for thought within companies is not the place for a fully detailed and reasoned discussion of the detail of an impending and largely ignored crisis.

While groups focus on refugees and the treatment of illegal migrants, even the homeless, there is a group that governments - their own and their hosts - treat as cash-cows with few rights and no privileges: those who live and work in a country under a work permit.

A work permit has two primary features: it authorises a person to enter and live in a country while that person is employed in a specific job for a specific employer. Often even the location is specified meaning that, without a modification to the permit, a person employed at a factory in one town cannot be transferred to be employed at a factory, owned by the same employer, in another town.

If we look at this from the government's point of view, there is strong logic in this approach: migrant workers tend to cost less than local workers - and even so earn more than they would at home. Governments aim at full employment of their own citizens. This does not, say economists, mean that there is 100% employment - there must, they say, be around 3% unemployment to provide for people changing jobs, taking a break, those unable to work for reasons of their own or a family member's illness. But full employment does not allow for elective unemployment - that is those who put themselves in a position where they cannot find a job or who refuse to take work that they don't want to do, including unskilled work or manual labour.

It is in the unskilled and manual sectors that many migrant workers are to be found. They are, usually, more or less invisible and this is why those sectors tend to attract more than their fair share of illegal migrants. There are also those involved in shady businesses such as prostitution and the essential jobs such as porters in wet markets. Again, they are relatively invisible.

Where they are not invisible in in retail, F&B and hotels where everything from cleaning via service, kitchen work and reception is very often handed by foreign workers.

It is this group, the legal employed foreigners, that are a point of crisis.

1. When, as many have been and many more will be, they are made redundant because businesses have failed or will fail, their work permits immediately terminate. With that, so does their right to remain. As of that moment, they are illegal in their host country. Most countries give a grace period, perhaps seven to fourteen days for those in that situation to leave the country. But in the current state of affairs, many cannot leave because their home countries are restricting arrivals even of their own citizens and, even if they were to arrive, their travel away from the airport would not allow them to get to their own homes leaving them stranded, usually with no support except, perhaps, a 14 days' quarantine period.

2. A person who becomes unemployed cannot, in most countries, apply for a work permit while they are in that country. In one example, a large (500 room) resort hotel has announced that it will not reopen until 2021. It says that its staff are welcome to find interim work elsewhere. But those engaged on a current work permit cannot, either with or without that work permit, and they cannot obtain one, even if they find another job.

3. A person whose work permit cancelled is, prima facie, not permitted access to healthcare and their employer-related health insurance ceases on termination.

There is an irony in many countries there are thousands of illegal migrants working and who continue to work - how many of those jobs could be taken up, if those already in the country were allowed to transfer their permits, to those who have followed a legal path to employment?

Yet, while looking at the plight of foreign workers, governments must not fail to consider that there is mass unemployment amongst their own citizens. It is ironic that, at a executive level where there is local competition but not necessarily local competence to similar standards, that there is greater protection for local candidates than at a less skilled level, with governments unwilling to require their own citizens to take up the so-called 3D (dirty, dangerous and difficult) work which is the fundamental reason that migrant labour is in such widespread use. That they are often poorly paid, especially in countries aiming at developed status, is another factor.

The lack of recognition of skills outside the office environment is a tragedy that is now biting countries on the bum. There are far too many graduates and far too few people willing to study to become e.g. bricklayers and plumbers. Much of this is because of the system of multi-layer subcontracting where a lucrative contract is awarded to a company which then breaks it down and one after another subcontractor passes their part of the job down the line until it reaches someone cheap - and often poorly skilled. Until a system of direct labour is adopted, this will continue with poor quality results obtained at high quality prices. It is this race to the bottom that makes the 3D jobs unattractive to locals who prefer to be unemployed than to get their hands dirty. That, however, is not what governments can afford to argue - having created a selectively educated and heavily indebted population, it cannot now tell them that their education has equipped them only to be canon fodder in the construction sites and street markets of the world.

So, there is a dilemma: post lockdown, the very people that sensible economic policies (having no regard to the humanitarian position) dictate should be expatriated to their home countries are the very people that will restore the economy while governments pay large numbers of citizens to stay at home; it is those who will provide the fuel for the over-stretched and over-borrowed governments to continue to function on any level at all. Even governments and the International Monetary Fund must, at some point, realise that expanding the money supply by the creation of ever more money (which is in any event fictitious) and even borrowing that fictitious money is not a solution to the problem.

At present, it appears, governments are looking at this from a simple, black and white, immigration perspective: no permit, go home when you can and in the meantime we'll turn a blind eye if you arrived legally but have, by reason of circumstances outside your control, become illegal or, at the very least, unlawful.

But it's a far more complex situation than that and it's one that those with extremist, largely nationalistic views - from both left and right, and those with a poltical-religious standpoint - will seek to exploit. Governments are going to have to take an independent position, what is good for the economy and for society. However, while, generally, society has been willing to unify behind the fight against an unseen enemy that is killing people, it is almost certain that the old fault-lines will become apparent and government support - which across the world has seen a rare increase in trust of the incumbent government - will once more be tied to those to whom the governments are beholden and those who want to be in that position.

But even if they are, is there a workable solution where there is mass unemployment today and, as companies review the viability of pre-lockdown operations and, even, the entire business, even greater unemployment to come?

The lockdown situation has already shown that many criminals, particularly money laundering cash couriers and traffickers in a wide range of contraband including humans, have found that their traditional routes a blocked. For those engaged in modern slavery, they don't care where they get their supplies from. Very soon, the biggest pool of available victims will already be in the country which would, previously, have been a destination. We are already seeing a significant increase in prostitutes advertising on dating websites: they are not obvious but there are certain traits that mark them out - and there are many very similar profiles suggesting an organised approach. But such businesses generally rely on a turnover and in places where travel is difficult or banned, they cannot be moved between locations. A new supply is always needed.

Also, the lack of access to medical care and testing means that there is a significantly increased risk of sexually transmitted diseases. In some countries there has been a shortage of condoms.

In addition to those who recruit for modern slavery, there will, without any doubt at all, be growth of "agency services" who claim to be able to secure work permits or authorisations to stay. These have long plagued even legal migrant communities, driving people into borrowing from loan sharks (often associated with the fraudster). Why do people use them? Because, often, there is a history of corruption in immigration offices and agents will often pay off an officer to make a fake entry. Increasing computerisation is reducing that opportunity but that doesn't stop the fraudsters making up false immigration stamps, knowing that they will have dumped the prepaid phone that the victim was calling long before the fake stamp is discovered. 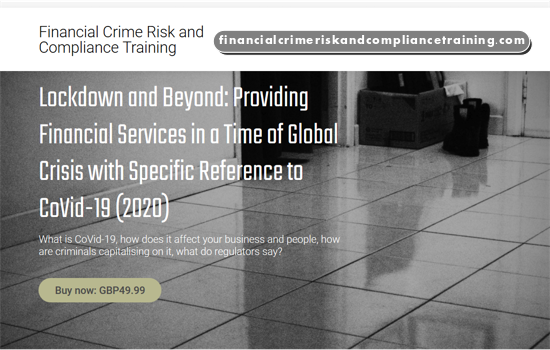