Good morning. I seem to be having some difficulty working out how long a month is, as it seems that my last monthly newsletter was on 25th August. That's as close to two months ago as no matter.

In that two months, much has happened in the world and a lot of it has a direct, or indirect, impact on the world of financial crime risk and compliance.

We've seen across the world a significant number of seizures at customs of an extraordinary array of items. Of course, there's the usual cigarettes, real and counterfeit, and the same with alcohol. But there still seems little done to stem the flow of counterfeit goods except those relating to medical, or para-medical supplies such as facemasks and the like.

Some of the confiscated goods are real but attempts were made to evade taxes, some are poor quality but not technically illegally sub-standard because, often, standards are not documented or, even, lack precision.

The trade in wildlife and its parts is heavily in the news but captures at borders are not as common as one might imagine.

But the most impressive change is in relation to the capture of drugs and cash. Here, it's not the small-time mules that raise interest but the bulk movements of both. You've got to be a bit simple to imagine that it's going to be easy to carry almost GBP2 million in five suitcase into Dubai. But that's what a woman whose luggage was identified as suspicious during scanning at London's Heathrow airport. She is being charged with money laundering.

It is said that one reason that such seizures are becoming more common is because the volume of shipped goods is reducing and so they stand out more. But that's not entirely so.. private shipments, i.e. not in cargo or by courier, feature heavily.

But there seems to be injustice, too. A woman travelling from Paris with an alligator-skin handbag arranged the necessary CITES certificate before leaving France. On arrival in Australia, the AUD14,000 bag was confiscated because she had not obtained a second CITES certificate relating to Australia. It was reported that the bag was to be destroyed.

That is patently silly.

Why has CITES not created a centralised, ideally blockchain-based, register that items can be recorded on and simply scanned on exit from and entry to countries? A durable tag can be attached at manufacturing stage or added later. Duplicate stickers could be applied to passports or their covers. It's a very easy thing to do and it only needs to be done once and the register updated on transfer of ownership. The neat thing is that it could also be used to combat counterfeiting and the use of such items as tokens in money laundering.

So, readers at CITES and at the many customs departments who subscribe to this newsletter - why not do that?

The past few weeks have seen quite a few developments at Financial Crime Risk and Compliance Training (link below) Working with a training services provider, we planned a face to face course backed with a full e-learning presentation, examination and certificate.

That has had to be postponed because of increased restrictions following a significant increase in CoVid-19 infections. En passant, my blog (link below) has a new article about the hidden victims of the pandemic in "The Loneliness of the Long Distance Manager."

Also, one of the reasons there was no newsletter in September was that I wrote a long blog about the FinCEN Files. I am hugely critical of many aspects of the reporting.

We launched the course Essentials: The financial crime risks of Offshore Financial Services, Private Banking and Family Offices, then almost immediately added a dozen pages looking at several important cases that set the tone for the entire sector - and the treatment it has received.

Today, we've added a new section about a huge offshore banking scandal in which the undercurrent is that of regulatory capture.

Next week will see the launch of another new course: Essentials: The financial crime risks of corporate vehicles, trusts and other structures.

This includes a fascinating study of how financial scandals starting 400 years ago not only demonstrated a range of financial crimes but also produced regulatory and enforcement techniques that were rarely used until the past 30 years or so and which now form the backbone of freezing and confiscation by the state.

The course examines various legal concepts and, of course, the expected KYC/CDD on corporate vehicles, trusts and other structures.

We have several more courses in preparation for release before the end of this year and we are already building our 2021 release schedule. Each course is carefully researched and written in a style similar to a lecture, so that it's chatty and not overly formal. But, of course, we are dealing with formal and legal topics so the language used must reflect that.

When I'm writing, I do not shy away from being contentious: there is no point in presenting you with a list of things plundered from government and quasi-government material and presenting them as fact. In truth, those documents are the result of endless filtering through what their proposers want you to think. I see it as my job to point out the things that were left out and to get you to think about those.

If we are to be effective against financial crime, which ranges from paid-for child abuse to paying constituents to vote for a particular party, we have to think about the things that we don't want to think about. We have to challenge orthodoxies.

As I've said in training courses for more than two decades "those required to detect and deter financial crime are taught to think in straight lines; criminals think around corners."

We need to test and challenge everything we are told, never to accept blindly what we read, no matter where we read it. Fake news and mis-information did not start with the internet. "Authority" is often not what it seems.

I take it as my role in this industry, as one if its founders, to raise that challenge and to at least tell you where valid challenges lie. Whether you take it up is entirely your decision but.. don't you think you owe it to yourself and more to think about it?

Stay well, stay safe - and visit the blog and the training site.

[You can sign up to receive this newsletter in your mailbox once per month, plain text only, at 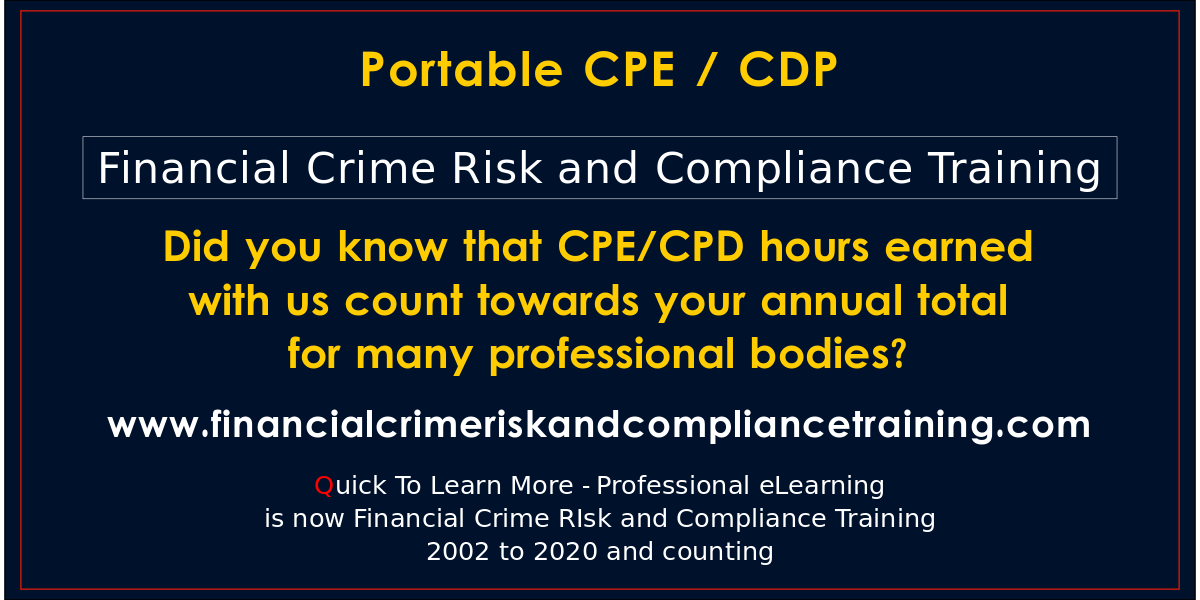