In 1996, in How not to be a money launderer, I wrote the following:

"Bank Leu is a legitimate Swiss bank with an office in Luxembourg. In 1993, it was convicted in a district court in California of laundering drugs money originating in Columbia. Bank Leu had no branches nor even representative offices in the USA, in fact it had no presence there at all."

In 2003, another author, with the backing of a large publisher, wrote

"Bank Leu is a legitimate bank in Europe: it has no representation in the United States of any kind, or at least did not in 1993. ... that in that year it was convicted of laundering Colombia drugs money in a California district court."

"A man opened an account with Bank Leu in Luxembourg, All transactions took place there. A series of negotiable instruments were presented for payment and accepted by Bank Leu. The bank seems to have taken the view that the instruments were issued by a legitimate bank and therefore the funds were legitimate. The fact that the instruments were drawn on banks in California gave to the US courts, in the eyes of the US authorities, jurisdiction to try Bank Leu on charges of money laundering. The allegations were that the bank should have realised that all the instruments were in denominations equal to slightly less than USD10 000. The bank should have asked questions but instead it turned a blind eye, a sort of constructive ignorance. The bank accepted deposits of some USD2m. On plea bargain, the bank was ordered to forfeit USD2m to the US and the equivalent of an additional USD1m to the Luxembourg authorities.

"The US court accepted that the bank had been “wilfully blind”.

"Why should the bank have been suspicious? It is because in the US there is an automatic requirement to make a report of cash transactions of any amount of USD10 000 or more. In order to circumvent the reports, there has developed the practice of “smurfing”, the passing of amounts slightly less than USD10 000. The USA takes the view that everyone, including those with no US presence, should know US law and if there is enough to make a person suspicious, he should act accordingly. "

The other author wrote:

" The sequence of events that led to this conclusion began in Luxembourg, and also in the main took place there. Bank Leu in Luxembourg opened an account for a customer who presented negotiable instruments for the credit of his account. The instruments were drawn on a legitimate Califorinian bank and were accepted by Bank Leu. In total, the credits to this account totalled more than $2 million - however the instruments were all slightly less than the magical suspicious reporting figure of USD10,000. This reporting figure is, of course, applicable in the USA not in Luxembourg. The US authorities took a different view as they claimed jurisdiction in the matter as the financial instruments were drawn on a bank in California: hence Bank Leu was convicted int aht state. Ultimately, the bank returned $2 million to the US authorities and approx $1m to the Luxumbourg authorities."

I completely accept that there is no property in facts. But there is property in the way those facts are presented. This other author's style is remarkably similar to my own - at least at that point.

But there is one major thing worth making clear. If, as I suspect, that passage is a thin re-write of my own work, the other author demonstrated not only that he did not fully understand what I wrote but, equally importantly, did not understand what he was writing about.

Readers will note his statement " the magical suspicious reporting figure of USD10,000." No, that is completely wrong. It's not what I said and it's not what the law says. Cash transaction reporting thresholds have absolutely nothing to do with suspicion. Nothing, Nada, Nowt and all those other N words that would take so long to list.

His publishers, who had turned down my book in 1996, should, perhaps, have run with the one that is right, not the one that's not original and is incorrect.

They know who they are :)

Why now? It just popped up in a search as something that's digitised on Google books and therefore, because Google promotes its own things above all else, people will see his work and, probably, not mine.

I'm just setting the record straight in case anyone bothers to check. 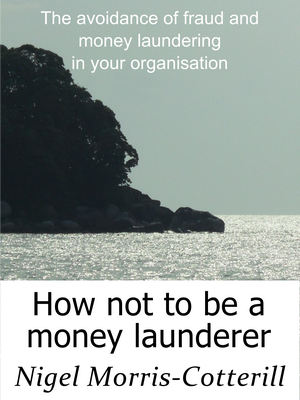