20180606 Rough data is good enough to decide if there is suspicion.

20180606 Rough data is good enough to decide if there is suspicion.

Late yesterday, I posted to LinkedIn a message about the way sound travels around the concrete canyons in Kuala Lumpur. I had tried to work out the location that a sound originated from but had fallen into helpless giggles when I realised that I could only calculate the position of the source if I had the location of the source. That, of course, was a circular argument and of no value to anyone.

Why, one might ask, would anyone bother? In my case, it's partly that I really hate not knowing stuff once I'm interested in it. The second is this: when we are dealing with suspicion, we are dealing with imprecise data. We have facts but the conclusion we reach is an opinion based upon our own subjective (i.e. personal) interpretation of those facts.

Here, with the answer to the puzzle which woke me after two hours sleep and refused to let me go back to bed until I'd documented it, is how and why this is important in financial crime risk management.

Here's what I posted on LinkedIn:

"Sitting at my desk, a bus (or similar) horn was blown on one side of my flat and came from my right. About a second later (don't ask how I know that, I just do) its echo reached me, via buildings, from my left. So, given that sound travels about 330 metres at sea level in dry air conditions (it's humid here so sound travels slightly faster but then again, it has to climb 36 floors to get to my windows so we'll assume the two cancel each other out), the vehicle must have been about .. well, that's the thing. The distance from me, sitting in my chair, cannot be calculated. There are so many tall buildings around, all facing slightly different directions that there a) isn't a "clean" echo and b) it's impossible to tell which one the dominant echo came from. All I can say is the distance from bus-building-me is, roughly 330 metres and it still made enough noise, twice, to distract me. Oh, well, it was interesting to try to work it out. "

Why did I have so much trouble with the equation in the first place? It was because I demanded data which I did not have and could not have. The bus was on a road. At a specific point in time, it was at a specific point in place. Whether it was travelling is irrelevant. I was convinced that, in order to work out its location, I needed to know how long the sound had taken to reach me the first time. That, of course, means that I would have an arc on which the bus was at the time the horn was sounded. But because I know that there is direct line of sight to the road to my window, and I know the speed of sound, if I know how long that sound took to reach me, I know where the bus is: it's where the 330m arc intersects with the road. Ergo, if I have the essential information with regard to the first sound, I have the location of the bus and the second sound is irrelevant to that calculation.

But it is precisely because I didn't have that data that the second sound and the related calculation is relevant.

It was this that woke me. I am looking for the equivalent of suspicion, I am not looking for knowledge. Knowledge would be nice but it's not essential to come to a valid conclusion.

Given that, I could make certain assumptions. 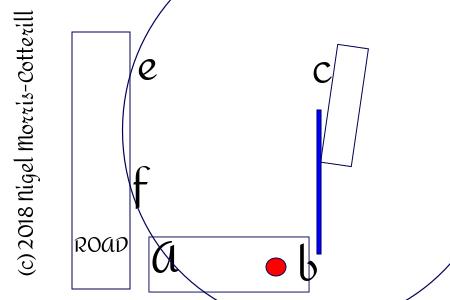 I'm the red dot, sitting at my chair. The first sound arrives via direction A at time T. The second sound arrives via direction B at T+1 second. There are several buildings but there is one that is the primary culprit of reflected sound. I know this because there was barely any sound reflected into my flat before it was built. It's a big building with a large flat rear which faces towards the road. Assumption number 1: that is where the primary echo came from and the reflection point is somewhere near the middle of it. That, I estimate, is about 150 metres along the blue line.

Given that sound travels at 330 metres per second and there was one second between the sounds, that means that the reflected sound travelled 330 metres further than the direct sound. Taking 150 metres from the total, that gives an arc of 330-150=180 metres. We are reasonably certain that the bus was on the road (the alternatives are very unlikely, especially if he needed to honk his horn) and so the position of the bus is where that 180 metre radius arc from the reflecting building, C, intersects the road. That's e and f.

The distance to the road from C is about 150 metres and so the two points of intersection are close to each other. We have enough information to be able to provide a valid suspicion as to the location of the bus. Yes, it's approximate but that, by definition, is what suspicion is.

Is the calculation exact? No. There is one piece of information that I don't have and it goes back to the original reason I had trouble. My calculation depends on the difference, the delta, at the red dot, that T and T+1 second. The calculation only gives us the position if we know how long the sound arriving via A took because we have to add that time to the T+1 time. We can make another assumption: now we have the points of intersection, we can see that they are, entirely by coincidence, roughly 300 metres from the flat. An entirely unscientific and mathematically dubious assumption, then, is that to get the correct position, we need to move the point of intersection about 300 metres further away.

Is it close enough? Yes, because we are not dealing in absolute fact, we are dealing with interpretation, with opinion and with the kind of fuzzy logic that comes after only two hours sleep. Is it enough to mount a prosecution? Probably not. Is it enough to justify further investigation, absolutely.

The test also proves something else: if something is niggling at you, you can't ignore it and hope it will go away. That's how people end up being prosecuted for failing to make suspicious activity reports. So, while I don't suggest you get up in the middle of the night to come to a vague solution of a theoretical problem, I do suggest that you don't walk away from things that aren't quite right and that you reach a justifiable and documented conclusion as to why you did, or did not, make a report.