Ten Things You Need To Know About Dealing With Death

Ten Things You Need To Know About Dealing With Death 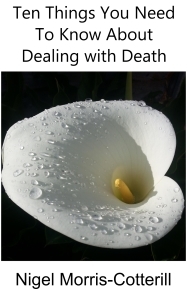 To buy: visit your local Amazon group site and search for product code 1507730128

When Nigel Morris-Cotterill's elderly mother died unexpectedly, he found that one way to help his father come to terms with loss was to set out a series of bullet points.

For fun, he called them "rules."

The rules were basic statements, intended to act as reminders, to help head off some of the worst aspects of grief. Morris-Cotterill found himself repeating the rules, issuing constant reminders as grief took hold. And so he decided to write them down. Then explain them. "Suddenly, I realised I had a book," Morris-Cotterill says. "It's tiny: the main part is only 50 pages or so. But it's the essential stuff that people don't learn until it's too late. No one tells people these things when someone dies. Everyone is far too busy to think about the one who is left behind. That's the person that this book is for."

Morris-Cotterill was a lawyer in private practice with a focus on complex litigation but he always kept a part of his professional life for non-corporate business. Within that area, there were families in crisis, the infirm, those suffering from age related illnesses of the mind and body and those who had to deal with their affairs, both before and after their death. "When someone close to you dies, you deal with administrative matters robotically, you remember to eat and drink but you don't remember what you had to eat and drink. You are assailed by your own thoughts and by all manner of pressures from outside. Worst of all, you don't know if your reactions, your feelings, are appropriate. The most important rule in this book is Rule 2: "You are the most important person now."

Morris-Cotterill says that the book will help those preparing for in imminent bereavement, such as where a family member is terminally ill. The book is available now from Amazon.Com group sites in e-book format and will shortly become available in paperback initially via Amazon.Com group sites but, as it feeds through distribution channels, through both on-line and traditional bookshops around the world. Morris-Cotterill says "It costs less than a cup of espresso but it could help you overcome the worst days of your life."

To buy: visit your local Amazon group site and search for product code 1507730128