If we consider that financial crime is generally the preserve of the relatively intellectual criminal, then we must use intellect-based measures to detect and deter those offences.

We must also view those who operate to counter and / or prevent financial crime as an industry but one which is, on the face of it, less fragmented. At the top of a pyramid are intergovernmental bodies and at the bottom are individuals. 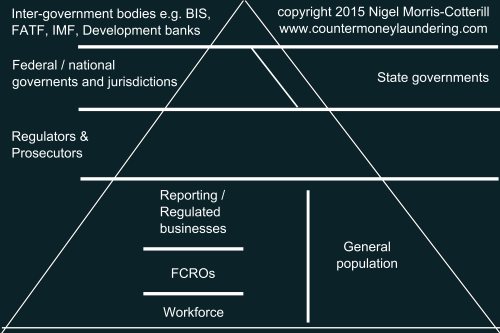 At the top, the message is delivered with force, albeit often confused. As it filters down, the force reduces and the clarity even more so. Yet the detail to which each level subjects the next level down increases.

Conversely, the information upon which suspicion may be formed is greater at the bottom of the pyramid than at the top. Information moves up the pyramid only when it passes the filters set at each level.

At each level a range of attitudes, cultures and behaviour determine whether information passes up. It is self-evident that the more people there are in each class, the wider that range becomes.

The challenge that faces reporting institutions, in particular, is to understand those cultural challenges and to take steps towards a homogenised approach under which the entire workforce views and reacts to similar information in similar ways.

Attempts to do this by schedules of inherently suspicious activity militate against the effectiveness of this review process.

"Understanding Suspicion in Financial Crime" is a detailed examination of the formation of suspicion and, in part, how criminals are able to make that play out to their advantage.

to host this seminar.